I’ve recently added an Engel refrigerator to the collection of stuff I carry with me in the 4Runner and felt the need to provide it with its own source of power. Call me silly, but a dead battery alone in the middle of nowhere is not my idea of a good time. Yes, I know that in theory the Engel will not draw the battery below enough charge to start the vehicle, but theories have to be proven to become facts and I’m not willing to risk it. I also tend to like redundancy in systems that allow for a safe and uneventful completion of my outdoor adventures. Perhaps that trend started after I drove two hours to fly fish the Deschutes River and broke the only rod I had with me while simply stringing it up. Now I don’t leave the house without at least four rods, even for a day trip. 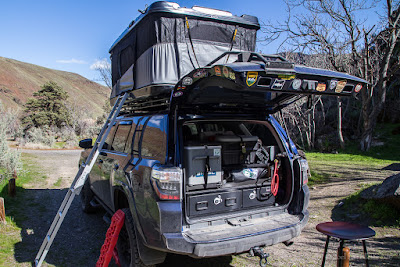 My first step in the process of adding an extra battery under the hood was to talk to the guys at my local 4x4 shop. The quote they gave me seemed reasonable, but didn’t include many of the parts I would need to complete the project. I would have to supply a battery mount, a replacement washer bottle and misc. kits to move various engine components to different locations. Basically, they would provide a few parts, labor and expertise.

Digging deeper into this project I discovered that if I continued with this piecemeal approach the costs would nearly double. I decided to do a little additional investigating and perhaps handle the install myself.

One of the many advantages of owning a popular vehicle like the 4Runner is that there are a plethora of aftermarket parts and custom shops available to help you outfit and explore. One such shop popped up on my social media feed and after some additional on-line research I reached out for more information.

The best I can tell, Off-Grid Engineering is a one or two man operation in Colorado that designs, tests and builds duel battery systems for the Toyota Tacoma and 4Runner. Matt Carter, the man behind the brand seems to be a bit of a perfectionist if a close inspection if his work is any indication. With email back and forth completed I was sure that I was going to be happy with his system and placed my order.

In a few weeks a packaged arrived and I immediately put daily work requirements on the back burner and cracked it open. From the beginning I was impressed. All of the parts were carefully package with protective wrapping, with nothing bouncing around loose in the box. Upon inspection I found that my initial thoughts on the lack of complexity of the install were correct. While the install instructions were simple, they left nothing to the imagination and included a photograph for those more visually influenced.

The install took me about two and a half hours, with some of that time spent dodging rain squalls. With my James Baroud tent on the roof, the 4Runner doesn’t fit in the garage all the way, leaving me to wait out the downpours before installing the cockpit switch. All of the engine compartment work was done in the dry and was fairly straightforward. Installing it myself saved me about $400, half the cost of the system. While my local 4x4 shop didn’t get the install business, I did purchase my new batteries from them. 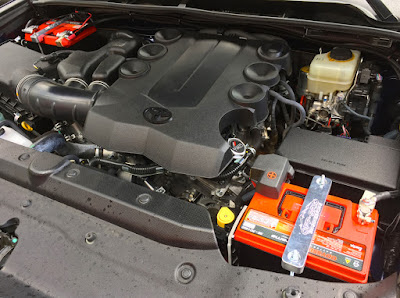 As mentioned, the attention to detail in the wiring and other components showed the unmistakable signs of an OCD engineer, which in this case is a good thing. All wires are supplied cut to the proper length, with beautifully attached fittings and braided coverings. The battery mounts and switch bracket are engineered to utilize stock mounting studs and pre-tapped mounting points. Installing the secondary battery mount takes only minutes and it is very sturdy. 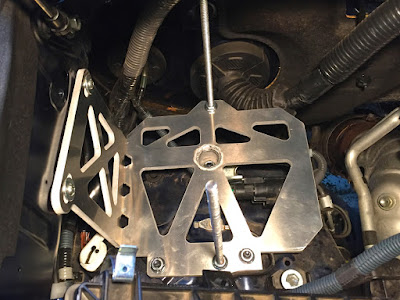 The Off-Grid Engineering duel battery system includes a Blue Sea 500 amp, dual voltage sensing relay and pre-wired management switch for in-cab installation. These combined with the aforementioned pre-cut wires makes the install simply a matter of disconnecting the main ground and hooking up the wires to the relay, secondary battery before reattaching the main ground. 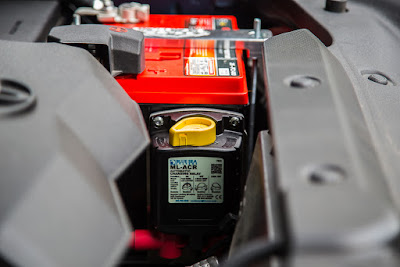 I do have one or two install tips after fighting the wiring passage into the cabin on previous projects. Remove the switch from the harness, photographing the location of the wires beforehand. Then cut off the clips. Feed the wires into the body of a ballpoint pen and use the pen to feed the wires through a small cut in the weatherproof rubber seal on the firewall. Once the wires are run through the firewall, reattach new clips to the wire ends and reinstall on the switch. Note: the pink wires are common so their location is not as critical as the rest. Also, some modification of the switch blank area is required. I used a Dremel tool to enlarged the area and press fit the switch into place.

Once installed, the Off-Grid Engineering system looks like it was designed by the factory as an option for the serious enthusiast and works without worry. There is no need to manually switch anything, unless you need to compensate for a dead starting battery and want to draw on both units. It is suggested that both batteries in the system be of the same type to avoid issues of one trying to override the other. I chose to replace my stock battery and went with two Odyssey PC1400 Group 35 batteries based on Matt’s recommendation. This system was built around that particular battery, although other batteries will work. Some people have had no issues running non-similar batteries in their vehicles, but since I’m not an expert I chose to go with the recommendation offered by Matt. So far, I have no complaints whatsoever.

If you’re rolling down the trail in a Tacoma or 4Runner and are looking for a little extra power to keep those beverages chilled, this system makes it very simple to add that second battery. While Off-Grid Engineering is a very small company now, I hope to see new stuff from them in the future. They’ve got some quality products to build on and at least one very satisfied customer.
Posted by Unknown at 4:33 PM